Title: The Driest Desert in the World

Abstract: I used to think that I knew exactly what a desert looked and felt like because I grew up in Arizona. My trip to San Pedro de Atacama, the driest desert in the world, showed me that there was a lot more to a desert that I hadn’t yet seen.

How far did I travel this week?
– San Pedro de Atacama is located in the Northern part of Chile so we had to travel quite a lot to get there. It is located in the Antofagasta region, which is North of Viña del Mar. In order to get there, we had to travel by van to the airport in Santiago, which took about an hour and a half. In Santiago, we hopped on a plane to Calama, Chile since there is no airport in San Pedro de Atacama because it is so tiny and isolated. The plane ride took another hour and a half and offered incredible sights including the top of the Andes Mountains! Our tour guide picked us up at the airport and drove us all the way to San Pedro and after driving for another hour or so (and after a quick stop at a grocery store in Calama since San Pedro doesn’t have one), we were finally in San Pedro de Atacama.

How did I get around this week?
– The town of San Pedro de Atacama itself is very small so people mostly walk to places. I don’t remember seeing a bus or a micro anywhere. Since we had a lot to see, we didn’t have the opportunity to do much walking. Our tour guide drove us around to all the different sites in a van. However, being the adventure-crazy people that we are, we found time to take a bike ride into town in some bikes that our hostel offered. When we realized there weren’t enough bikes for everyone and one of them had a seat for a baby, my friend, Nicole, sat in it and we took off into town. It was hilarious!

What was the most interesting place I visited this week?
– During our second day in San Pedro, our tour guide took us to the famous Tatio Geysers. To put it simply: these geysers are holes in the ground filled with boiling water that are heated by the volcanoes around it which causes them to explode up into the air. It was the most incredible thing I had ever seen! In order to catch the geysers in full action, we had to wake up at 4 AM because it is at that time that they are at their highest boiling point. Although it was tough waking up in the cold at that time, the sites of the geysers made it 100% worth it.

Other travel news:
– San Pedro de Atacama was special to me because it made me realize how lucky we are back home in Arizona. A lot of the times we complain about the burning heat or about how we need more rain, but compared to San Pedro, Arizona’s climate is very well set. It also taught me that we are very fortunate to have huge super markets and other stores near our homes in the United States. It was hard to live in a place that is a little isolated and we were only there for four days. I loved San Pedro de Atacama for the beautiful sights and for the lessons it taught me.

What is the air temperature right now?
– The current temperature is 55 degrees Fahrenheit. Remember, because it is a desert, it gets extremely cold at night. As I mentioned previously, it is also located in northern Chile so the altitude is higher. This means the winds are stronger as well, especially in an isolated place. Currently, San Pedro de Atacama has the perfect recipe for chilly weather!

How was the weather this week?
– This week there seems to be a lot more sun than usual for the winter season. It has an average of 70 degrees Fahrenheit all throughout the week.

What animals did I see this week?
– What animals roam around the driest desert in the world, you ask? Everything from foxes to vicuñas! Vicuñas are very South American and look very similar to llamas. We saw foxes and vicuñas on our drive back from the Tatio Geysers. They were hanging out by the main roads and, unlike most animals, they weren’t afraid or upset by approaching humans. They were so cool!

What was the coolest thing I saw in nature this week?
– Besides the Tatio Geysers, my favorite spot in San Pedro was the Salar de Atacama. Salar de Atacama is a salt flat that extends for many miles and is located near the Andes Mountains. It is also the largest salt flat in Chile. To help you envision it a little bit better, close your eyes and picture the following: An endless field covered entirely in salt and salt rocks, a few scattered ponds with beautiful pink flamingos, and a view of a volcano and the Andes mountains in the background. What do you think? Did you like it? An even cooler part of it was that you could pick up a handful of salt and pour a tiny bit in your mouth to taste it!

What languages are spoken here?
– Spanish.

What type of money is used here?
– Chilean pesos.

How much does a bottle of water cost?
– A gallon of water cost about $2.50 US dollars. Because San Pedro is a desert, water is handled more carefully and the price for it is higher.

What was the best meal?
– I love veggies! Although we went to very delicious restaurants, my favorite meals were the ones we made at our hostel. At the grocery store in Calama, my friends and I bought a lot (and I mean a lot) of vegetables to snack on during our trip. If you remember me talking to you about the feria that I went to when I first got to Viña, then you will remember me saying how Chile is known for its delicious fruits and vegetables. This is one of the reasons why I adore Chile. All the vegetables I ate, which included broccoli, cauliflower, carrots, red peppers, and many others, were my favorite meal/snack.

What music did I listen to?
– I listened to my iPod throughout the van and plane rides. I love all kinds of music, but I especially listened to a lot of country through the trip.

What activity was the most fun?
– Again, I will choose the geysers.

What did I read this week?
– Unfortunately, I didn’t get to do much reading on this trip because we barley had time to relax. We were on the move our whole time there!

What games or sports did I play this week?
– On our way to our hostel, I spotted a giant soccer field about five minutes away from the main town. Unfortunately, I didn’t have the opportunity to play soccer at any point, but I did get a glimpse of a soccer game when we were leaving town at the end of our trip! 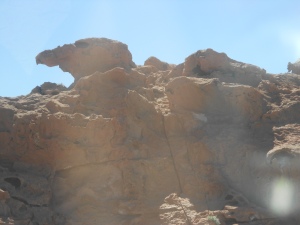 A rock shaped into an eagle in San Pedro de Atacama

First sights of the Tatio Geysers!

Hanging out with the flamingos at Salar de Atacama 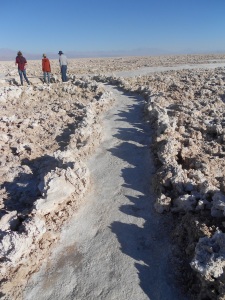 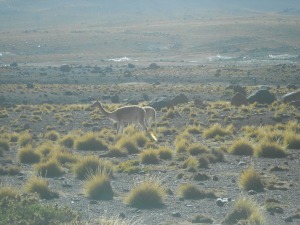