How far did we travel this week?

The amount of travel so far is vast, maybe around 1500 miles just to fly from Hyderabad to Delhi (including a transfer in Mumbai). The rest of my final travels will end up being around that same amount.

How far have we traveled on our journey so far?

It’s really hard to say, but I think it’s over 10,000 miles. All the individual trips on weekends and on field trips add up quickly.

How did we get around this week?

I took an airplane, cab, autorickshaw, train and metro in Delhi.

What was the most interesting place we visited this week?

My friends and I did some standard sightseeing (Taj Mahal, Qutb Minar), but my favorite by far was the Lotus Temple. Completed in 1986, this Baha’i house of worship is open to people of all faiths and backgrounds, the only requirement being complete silence while inside. It is one of the most visited buildings in the world, and for good reason. It is the single most beautiful building I’ve ever been in. Every sound echoed in the domed structure and the light illuminated every corner. I was overwhelmed by the elegance and gravity of the temple. It was truly incredible to experience.

At the end of my semester I embarked on my last trip of India, from Delhi through a few cities across the north. I arrived in Delhi on the morning of the 24th, with a day trip to Agra. While driving through these cities, I was struck by the instances of modernity. The roads and surrounding buildings remind me so much of the U.S. There are speed limit signs and lane markings that drivers actually follow! The metro system is a lot like the T in Boston, super clean and efficient. Its advances in public transportation make Hyderabad feel like an ancient city, while Delhi feels futuristic. It was really relaxing just to watch the view from the windows while riding above ground. Delhi is such a complex city and I’ve had a really nice time exploring it!

It was sunny and hot most days, with occasional clouds.

How was the weather this week?

It seemed like typical Indian summer weather: hot, dry, exhausting. There was a strange rainstorm in Hyderabad the day before I left for Delhi, which cooled the air. So far in Delhi it was either sunny and hot or smoggy and stuffy. I kept hoping the gray skies would mean rain, but it just stayed stifling.

What animals did we see this week?

In Delhi and Agra I saw monkeys, cows, camels, water buffalo, dogs, birds, chipmunks and lizards (not unlike the animals of Hyderabad).

What was the coolest thing we saw in nature this week?

Flights always fascinate me, especially when I’ve got a window seat. I only flew a couple times before coming to India, so being on so many flights here has given me so much to think about. Watching the clouds surrounding the plane always makes me feel really small and light, as if I could just float off into the horizon. Early morning flights are my favorite because the clouds look fragile and fleeting, subject to any passing whim. It’s truly beautiful and thought provoking.

This Week’s Nature News: (short story about what happened this week)

We had an interesting experience after we visited the Taj Mahal. My friends and I were hungry when we left, so we bought some ice cream from a vendor outside the Taj complex. We were eating when we saw a monkey eyeing us from a bush. There were monkeys all over the complex so we weren’t too concerned. We kept walking until we realized that there was a small group of them following us. It was cute but a little unnerving, so we picked up the pace. Some of the monkeys were ambitious enough to continue, leaving us nervous and unsure of what to do. My friends Lindsay and Nell were a bit paralyzed, ignoring the monkeys and trying to stay calm. Suddenly, one ran out from a bush and raced toward Lindsay. He jumped at her and tried to steal her ice cream, missing by a few inches. Lindsay screamed, threw the ice cream on the ground and raced away, half crying, half laughing. We were terrified and ran all the way back to the cab. These monkeys are ridiculous, stealing things right out of people’s hands! Earlier I had seen a monkey eating a green popsicle on the side of the road. Maybe it was a sign of the drama to come! They are so cute and funny, but really terrifying up close.

I had spinach datchi (Bhutanese cheese dip and soft bread) at Yeti, a really cool Himalayan restaurant in Hauz Khas Village in Delhi. Hauz Khas is a super hip part of the city with lots of quirky shops and interesting food. My friend Nell ordered veg momos (steamed dumplings) and I had the datchi. It was one of the best meals of my life, seriously.

What music did we listen to this week?

I heard a lot of Bollywood music, as usual. It plays everywhere from cabs to malls to restaurants, often sneaking in as background music. One interesting thing I heard was a Lil Wayne song coming from a young woman’s iPod on the metro. It was surprising to hear and really amusing to think about.

Exploring Hauz Khas Village with my friend Nell was so much fun because there were a ton of hip shops to browse through. We looked through clothes, old pieces of art, sculptures, books and food. At the end of the day, I came away with an old Bollywood movie poster and some postcards of behind-the-scenes footage from Satyajit Ray’s films. The whole place felt like a really well curated museum.

I’ve been switching between the Lonely Planet guide and The God of Small Things by Arundhati Roy (still! I’m a slow reader). I also started The Fault in Our Stars by John Green because I wanted something quick for my flights. It’s great so far!

What games or sports did I play?

The only game I played was “Find Where You’re Going on the Metro.” Nell and I ended up going in the wrong direction on the metro quite a few times because we weren’t familiar with the place names. We would arrive at the station, ignore the map and alternate picking which way to go. It’s a really good way to kill some time and see new sights!

On my last full day in Delhi, Nell and I met with a friend of a friend of my parents, Vicky Roy. He’s a young photographer based in Delhi and a burgeoning force in the art world. Vicky took us to a gallery in which he was featured in the main exhibition, all about Gandhi’s 1930 Salt March. It was fascinating to see the many perspectives on such a monumental event in Indian history. They ranged from poignant to defiant and everywhere in between. Vicky’s photos addressed Gandhi as a man, myth and hero, as a force of change that is within everyone. Seeing such perceptive and modern takes on an instant in history helped me understand a bit more about India’s political stances, then and now.

As magnificent as they say

Entrance to the Taj

Finally made it here! 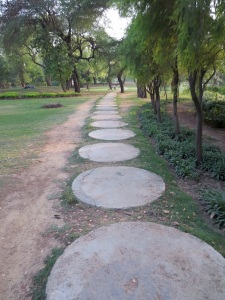 Just another way of getting around 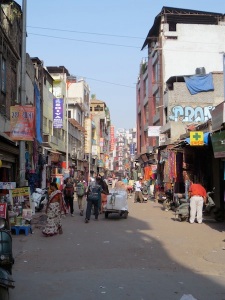 Plotting to steal our ice cream 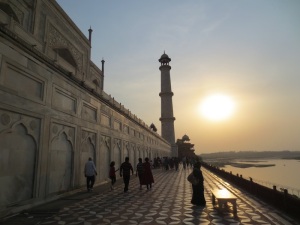 So beautiful at sunset 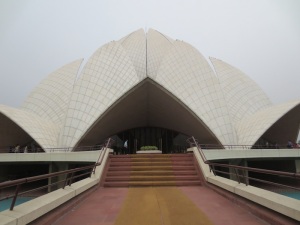 Tombs in the Lodi Gardens, Delhi