Abstract: A couple of weekends ago I had the opportunity to go to what I consider the most beautiful place in the world. I went to Pucón, Chile, which is located in the South of Chile. I went with a couple of other exchange students from the U.S. and Australia and had such an incredible experience. I love Pucón!

How far did I travel?

The most tiring part of this trip was traveling there. We took a 13-hour bus ride to get to Pucón, which is in the very South part of Chile. It was difficult to sit still for 13 hours, but it was entirely worth it. I would do it all over again in a heartbeat!

How did I get around?

Pucón is even smaller than Viña del Mar so it was even easier to walk everywhere. The interesting part was that we did not see one single taxi or bus taking people to different places. It only proved to me how small Pucón actually is.

What was the most interesting place I visited?
While I loved every single part of Pucón, my favorite part was getting close to Volcan Villarica. This is a very famous volcano in Chile and the last time it erupted was only four years ago in 2009! The volcano was covered in snow, which made it a million times cooler.

Other travel news:
Pucón is such a nature-filled place. I had never felt as peaceful as I felt during my time there. While other friends climbed up the volcano (I couldn’t because I was sick) and others went rafting, I had the chance to go canopying. I was so scared at the beginning that I even asked the guide to take me back down to the ground, but he helped me get over my fear and encouraged me to do it. I did it and it was one of the best things I have done since I got to Chile.

Number of snowy days: 0 (it only snowed around the volcano)

How was the weather?
It was a lot colder than I thought it was going to be. I really enjoy cold weather so it wasn’t horrible, but there were a couple of times where the really cold wind caught me off guard and gave me crazy chills.

What animals did I see?
Just like in any other part of Chile, there were stray dogs everywhere. The interesting part was the differences between the dogs. The biggest difference that I noticed most was that every single dog in Pucón had really thick fur compared to the ones in Viña del Mar. I eventually figured out that the dogs had to have thick skin and fur in order to stay warm in the cold weather.

The main language spoken in Pucón was Spanish. I heard a coupe of different languages spoken by tourists and other people visiting the town from other places in the world as well. During our stay in Pucón, we stayed at a hostel with an indigenous woman who knew how to speak Arabic. Interestingly, we had some people from Israel staying at the hostel with us as well, which gave my friends and I the opportunity to listen to a conversation in pure Arabic.

Chilean pesos just like in any other art of Chile.

How much money does a bottle of water cost?

Thankfully, water cost a lot cheaper in Pucón than in Viña del Mar. A giant water bottle cost only around one U.S. dollar.

What was the best meal you ate?
I surprised myself when it came down to food. I have never (and I mean never) liked hamburgers, but there was a small restaurant in Pucón that seemed to have the most delicious-looking hamburgers I have ever seen. I decided to try one. I loved it! It was extremely big, so I only ate half of it. It was the best half of a hamburger ever.

What music did you listen to?
I mostly listened to the music on my iPod throughout the trip.  I listen to different bands such as All Time Low, NeverShoutNever as well as some old music such as the Beatles and Bob Dylan.

What activity was the most fun?
I decided to zipline across a forest on the last day of our trip. At first I was terrified to fly from tree to tree, but the guides were very helpful and encouraging. After I ziplined across the first tree, I had the best time ever flying across the rest of them.

Unfortunately, I didn’t bring any of my books with me to Chile so I have yet to buy myself an interesting book to read. I will make sure it is in Spanish, too!

What games or sports did I play this week?
With homework, trips, and school I haven’t had very much free time to go out and play sports. I was playing with the university’s female soccer team for a while and also some friendly soccer games with other girls and boys who are studying abroad as well. 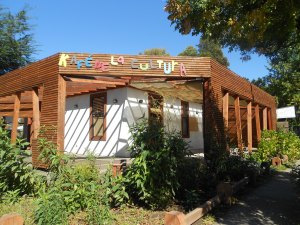 A cafe in Pucón

My friend Sam and I canopying in Pucón 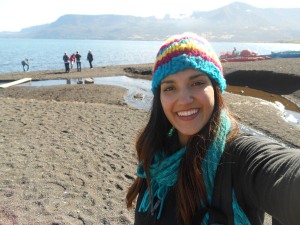 My friends and I at the lake

One of my favorite stray dogs I saw in Pucón 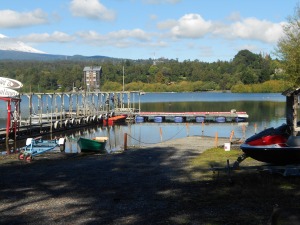 Our favorite lake in Pucón

Pucón had the biggest apples in the world! 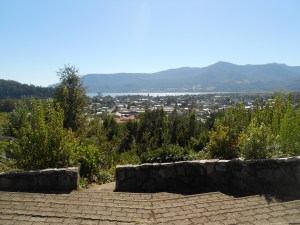 View of Pucon from a church on a hill 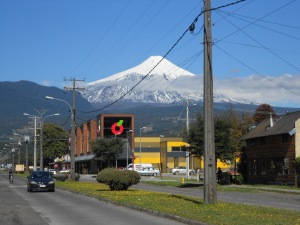 View of Volcan Villarica from our hostel