Have you ever tasted Chinese tea? In China, drinking and serving tea is done in a very special way called the Chinese tea ceremony! Learn about the ceremony and why tea is very important to China. I even have a video for you to see!

In China, there are many interesting traditions. For example, when someone says hello to another person, he or she will say, “Ni chi le ma?” This means, “Have you eaten?” In China, this is very normal because it shows that you care for the other person. Also, another tradition is the common use of chopsticks! Everyone in China uses chopsticks to eat their food. They mostly do not eat with spoons, forks, and knives. While these traditions are interesting, I think the Chinese tea ceremony is the most fascinating! Let me tell you more about it.

What tradition did I learn about?

The Chinese tea ceremony is very important in China! The art of drinking and serving tea has influenced Chinese culture for thousands of years. It has even inspired many poets and song-writers. In Chinese tea ceremonies, the tea is more important than the ceremony. People rather focus on what the tea tastes like, how it smells, and how one tea tastes compared to the previous tea tasted, and how the tea is prepared.

I learned about this tradition when I went to a traditional Chinese teahouse with some friends three weekends ago. It was amazing to see how the host serves the tea in a specific way, and how she pours the tea very carefully. Afterward, they are very happy to see us smiling after tasting the delicious tea. 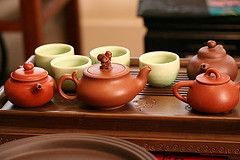 Let me explain to you the steps during a Chinese tea ceremony:

Why does the community have this tradition?

People practice the Chinese tea ceremony for many reasons. Pouring a tea to someone else can be a sign of respect. A younger person will usually show respect by pouring a tea cup to someone older. Inviting your elders to a restaurant and having some tea is a traditional activity during holidays. During family gatherings, going to restaurants and experiencing a traditional tea ceremony is a way to bond. Even during weddings, the bride and groom will kneel down on the floor and serve their parents tea. The tea will usually be served after the official tea ceremony is complete. Serving the tea is a way of saying “thank you” for all these years of raising me. The parents drink the tea and then give the couple red envelopes with money. 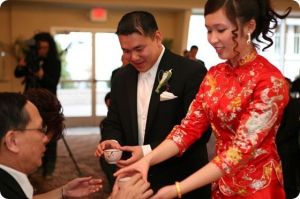 For a long time, tea was used as medicine to cure people from diseases. Ever since then, tea is very important to the people in China, and that is why tea ceremonies have been incorporated into many important events and gatherings.

Here are pictures of fresh tea and tea fields in Hangzhou. 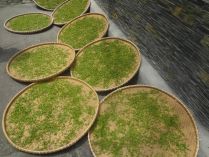 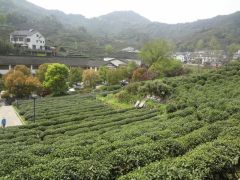