School was out on a Wednesday so a couple of friends and I decided to roam the city of Bangalore and take some photos. We ended up finding a beautiful wall covered in graffiti art that inspired us to take pictures.

It’s been three months since I’ve moved to Bangalore to study abroad. Quite a lot has happened, so many experiences that I’ll never forget, so many faces that have affected me. Before I came to India I had an idea of what the country would be like, of how I’d be adapting to the heat, of how I’d be seeing many beautiful temples, and of how I’d be cautious of food that would have me going back and forth to the restroom. Those were just a few examples that were emphasized during conversation with friends back home. Of course, I knew that those would be a few things I’d experience but I also understood that there was much more to India than words could describe. I was too curious and my mind was set on leaving.

I wondered how life was for an Indian woman. I am, after all, half Indian. I wanted to know what my life would have been like had I been born in India. Walking the streets as a female in India is daunting—that was the first thing I learned. I became much more aware of the way I dressed and how revealing I might seem to others. Every woman, I noticed, was covered from head to toe wearing a dupatta (or traditional head scarf) and curti (dress) or sari. I was fascinated by the way the women dressed, how they carried themselves, and how they were treated by the men around them. In the beginning, I saw it as a cultural tradition, but as I spoke to younger Indian people my age, my view changed. It seemed to me that covering oneself was a form of repression, a lessening of freedom. Do Indian women really want to dress traditionally or do they do it out of fear? Men gawk at women who reveal, even at the slightest, any part of their bodies. It’s wonderful seeing a woman in a beautiful traditional sari, but does she have other options to choose from?

This has been on my mind lately. Whenever I get out of house I notice what the women wear. Some things, I’ve learned, are considered indecent in certain areas of India. For example, showing one’s legs or shoulders. When one is wearing jewelry, the location can symbolize whether or not they are married. Questions run through my mind… Are they young? Are they old? Are they married or unmarried? What type of jewelry do they wear and why? The wheel used to turn in my head and cause frustration until one day I knew I wasn’t doing myself any good by thinking that way.

I see what’s right in front of me and acknowledge that Indian women have a choice. I forget sometimes that I am half Indian and that I am perceived as an Indian, not an American. An Indian woman’s decision-making process for getting dressed in the morning is probably very similar to mine. I wake up every morning thinking of what I should wear, but it doesn’t bother me, I actually enjoy it. I think of the different ways I could put my own spin on Indian fashion and make it my own. I’ve seen other girls do so and smile knowing that they have intention and choose to look a certain way. So why then, should I be so frustrated? Maybe it knowing that other options have been cut out. Now, however, I’ve replaced frustration with gratefulness, understanding that cultural context should be taken into account. I’ve become much more grateful for the options I have at home, not just fashion wise, but as a whole. I have the opportunity to make decisions at my will and speak out if I think something is unjust.

A few blocks away from my apartment complex there is a graffiti wall filled with inspiring artwork accompanied by words. My friends and I decided to take a photo shoot of this beautifully colored wall. I never thought of India as a place for graffiti art until I saw this and I appreciated it that much more. The artists were women with something to say, “The F word: feminist is not a bad word. Fearlessly reclaim the streets.” I was proud to see it, not only as an Indian, but also as a woman.

Photo shoot with my friend on the wall 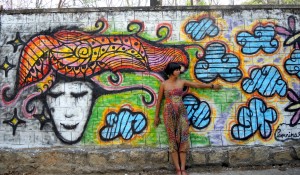 The wall and me 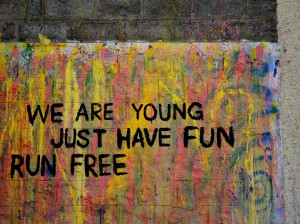