How far have we traveled on our journey so far? Over 6,000 miles. Almost 3,000 to get here from Milwaukee, 1600 miles to get to and from the beach and  over a  1000 traveling around Mérida  as well as going  to Los Llanos and La Azulita!

How did we get around this week?

Well, when I wasn’t at the beach I got around by walking to school and taking busetas to kickingball and rugby practice. But when we went to the beach for the weekend we took a private bus to there! The best part was to get to the beach we had to take a boat!

What was the most interesting place we visited this week?

I went to Parque Nacional Morrocoy, which is said to be the most beautiful part of the coastline of Venezuela!

This Week’s Travel News: (short story about what happened this week)

This weekend we took a 12 hour bus ride to the beach and it was absolutely gorgeous and so hot! It was crazy that we left late at night and when we woke up it was hot and sunny. We’re so used to it being somewhat cool in Mérida, but when we got to the beach all of us were dying of heat! Some of the best times were us boating around on these tiny boats (I thought we were going to tip) and we were able to see star fish and river dolphins!

It has rained every day this school week! It’s been so crazy, because we’re so used to it being beautiful every day. For the last three months it has rained maybe four times. But this last week every day!

What animals did we see this week?

Around Mérida, the same. Parrots, huge moths (at kickingball practices it’s the worst- they’re everywhere) and horses. But at the beach many different kinds of birds, river dolphins and starfish!

What was the coolest thing we saw in nature this week?

I loved seeing the river dolphins because the first time I told my younger sister Katherine that I was going to Venezuela she told me they had pink dolphins. Guess what, they do!

This Week’s Nature News: (short story about what happened this week)

At the beach it cost so much more, instead of 50 cents it was about 3 dollars.

I loved eating food on the beach because it was fresh fish with yucca, French fries and a Coca-Cola.

What music did we listen to this week?

The best way to do a road trip is with music! So we played a lot of new Venezuelan music and a lot of Salsa music. But it stunk at night, when we were all trying to sleep because the bus driver was blasting the Salsa music.

I loved going scuba diving this weekend! It was amazing to see this beautiful coral. But it also stunk, because you see parts that have been ruined by pollution and damage from the boats. You see how much our actions affect others, including the animal life in the water!

I actually wrote a children’s book for my Children’s Literature class!

What games or sports did I play?

I played kickingball and rugby for the last time here. It was so fun but so tough to leave my teammates.

This Week’s News: (short story about what happened this week)

This week I’m going to have to say goodbye to my family. So this weekend I just wanted to hang out with them. So Saturday I learned how to bake my Tia Dulce’s cake. It was so awesome to learn how to cook using grams instead of cups and learn how to bake in Spanish!

On our way home a tree feel in the road! 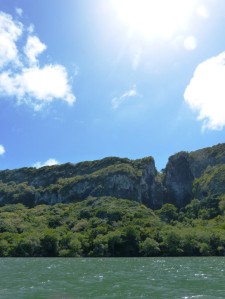 The coast of some islands in Venezuela 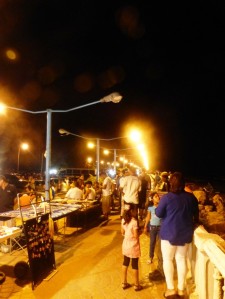 We went to a night market, and here are all the boats 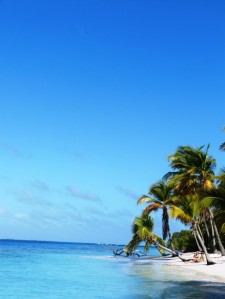 The most beautiful beach I’ve ever been to

It was this gorgeous.

The little shack where they made the fish for lunch

We went to a cave, it had huge rocks and little rivers in it. 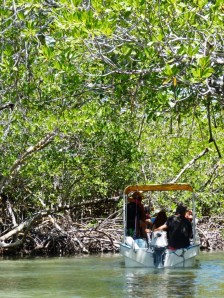 Here’s how we travelled around to the different islands