I love my Macedonian friends! Did you know that Macedonia is one of the friendliest places on earth? The World Economic Forum recently listed Macedonia as the fourth friendliest country to foreigners in the world (Davis). I have to agree. Macedonia is a great place to visit and live. People are very welcoming here, and there are many genuinely kind people.

For example, at the beginning of March I was invited to a Macedonian wedding. A couple of my good friends who I’ve mentioned before, Ana and Daniela, knew I’ve been writing articles for students in the United States and thought I would enjoy writing about weddings in Macedonia.  One of their childhood friends was getting married, and they wanted me to join them in the celebration.

Ana talked with the bride and groom in advance to ask if it would be okay for me to attend. Like in the States, it’s a little weird to show up to a wedding uninvited. When Ana talked with them it turned out that the groom, Trajce, knew me because he’s a taxi driver and I’ve ridden in his taxi before. Both the bride and groom kindly extended an invitation for me to join them and said it would be fine if I wrote about their wedding.  What an honor!

Like many couples in the United States, the couple whose wedding I attended wanted a more modern wedding, but just for a little background information I talked with my language tutor to get a clearer picture of what a traditional Macedonian wedding includes. As she explained to me all the details, it became clear that traditional Macedonian wedding celebrations are no joke. Traditional weddings last for four days. Yes, you read that correctly, four days!  Let me try to explain what happens during this time.

After the bride is taken from her bedroom, someone from the groom’s party offers her a pair of wedding shoes. It’s a tradition for the bride to refuse each of the shoes three times until on the third time someone puts money in the shoes. Then, with money inside, the bride accepts the shoes by putting them on. Next come the official wedding ceremonies. This is where I had the opportunity to participate.

On Saturday morning Ana and I made our way to the hairdresser to prepare for the day’s festivities. We had both our hair and make-up done. It is kind of fun to get dressed up for special occasions, and I had the perfect dress. We stopped at the flower shop so I could buy a bouquet of flowers for the bride. It’s always a good idea to bring a gift for the bride and groom, and I wanted to show my appreciation to them for inviting me. Ana told me a bouquet of flowers would be a nice gift. 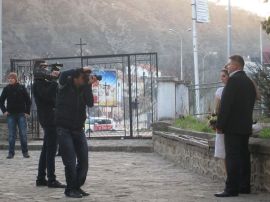 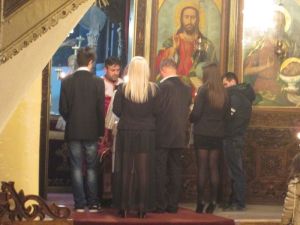 The bride and groom are being photographed.      At the ceremony.

The first stage of the actual wedding ceremony began at the municipality, where the couple received their marriage license from government officials. To me it looked like most of the closest family and friends from the wedding party were there. While the ceremony was going on, I realized I knew one of the officials. Wilma, one of the ladies I work with at the American Corner, later told me how she became a wedding official. She was elected as a municipality member through her political party, and is required as a member to serve as a wedding official for at least one year. Municipality members take turns serving as wedding officials until everyone has served for at a year.

Walking to the church.

After the marriage contract was signed, everybody congratulated the bride and groom, and the group moved to the main Orthodox church near the center of town to wait while the newlyweds had their pictures taken. The church wasn’t very far, and my friends and I walked. The Orthodox church where the ceremony was has a very rich history and is very old. Inside, the high ceilings and massive windows are very impressive. I recorded a part of the church ceremony, and you can check it out! (Link coming soon!)

After the church ceremony, it was time to celebrate! Wedding receptions in Macedonia seem to be very similar to receptions in the United States. One fun fact though is that the bride and groom provide a roasted pig for their godfather. The godparents of the bride and groom are people who are close friends or relatives. Being a godparent to someone is a very special honor.  Throughout the night, there were lots and lots of food to eat and lots of dancing. While dancing, people would give money to the live band for the bride and groom. My language tutor told me that it’s not hard for couples to raise 3,000 euros. That’s almost 4,000 dollars! 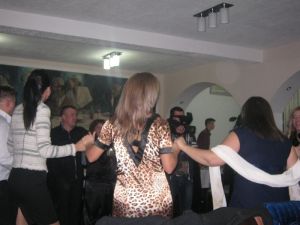 Dancing at the wedding!

Like on other special occasions in Macedonia, we also danced to traditional folk music with special dances. One of these dances is the Macedonian Oro. Oro is not a difficult dance to learn, and I think it’s a lot of fun. As we made our way around the reception hall, almost everyone joined in. It was very busy. In the middle of this ever-moving circle I felt like I was a part of something, more than ever before. We were all dancing with the same movements at the same time, young ladies and older ladies, old men and young men. Everyone was a part of the dance. I’ve never felt as connected to a community like I felt that night. It made me feel like I was a part of something much, much bigger than myself.

Well, the night continued on and we had our fun, but by one o’clock in the morning it was time for me to go home. My friend Daniela told me later that the festivities continued until seven o’clock the next morning! I really enjoyed experiencing a Macedonian wedding, and I’m very grateful to my friends for inviting me.