The London Eye and More: Logbook 5/13

On Friday, May 10th at 5:20 a.m. I got on the plane from Barcelona to London! I have never been to London and was so excited. Remember how I stayed with my old friend, Adrienne, in Rome? Well, we had decided to meet in London! Adrienne’s parents live in London, and we were able to stay in their apartment while they were out of town. She flew to London from Rome and I flew from Barcelona. How cool is that?

So, I spent 4 days walking around London seeing as many sites as possible. We walked over 20 miles around the city, but I also rode a tour bus from the airport to Stratford (a neighborhood in London), then took a double decker to the apartment. During the weekend I also traveled in a train, a boat down the Thames River, the subway and a huge Ferris wheel. We went all over the city. I saw the Big Ben, the Tower of London, the Tower Bridge, the Thames River that cuts through the middle of London, and much more. Here are some photos, but I put a lot more on my Tumblr page. I hope you are able to see my videos also and I hope you like them.

London is a very big city, much bigger than Rome, Barcelona or Portland. It’s still growing a lot. There’s construction everywhere. There were so many neighborhoods: the West End, the East End, the South Bank, the North Bank and so on. I ate chips, which we would actually call French fries. I had a lot of tea. The English take their tea seriously.

Oh, and this giant Ferris wheel! It’s called the London Eye and it is right in the middle of London. When you go for a ride, it takes you so high up that you get an awesome view of the city. It was so much fun, maybe a little scary. After that we took a boat down the river to Greenwich and walked back to the apartment. It was a really fun visit. 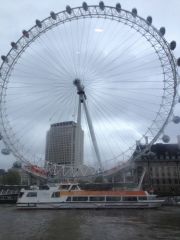 London for four days was awesome. The weather was a lot colder than Barcelona. I saw more animals, well at least some squirrels. I didn’t get to see everything in London, but I saw so many cool things. I really enjoyed all the neat neighborhoods and the many different forms of transportation. I had some different food and everyone spoke English. That was actually a shock. I’m so used to hearing Catalan and Castilian.

How far did I travel this week? I travelled from Barcelona to London and back. I travelled all over the city of London, at least 20 miles by foot. I’m not even sure how many miles I travelled in bus, boat and train, but it was a lot.

How far have I traveled on your journey so far? So far I’ve spent seven weeks in Barcelona, including a day trip to Sitges, a town south of Barcelona. I went to Rome for four days, and this weekend I’ve been in London for four days. Next weekend I will go to Granada in southern Spain to see the Alhambra! Stay tuned!

How did I get around this week?  I walked a lot. I have two favorite pair of walking shoes, and I switch back and forth. I rode on three different types of busses: a tour bus, a regular city bus and a double-decker bus. I went on a train and a subway (they are different on the inside and out). I floated in a boat down the Thames River and took a ride on a giant Ferris wheel! … And of course there was the plane flight.

What was the most interesting place I visited this week? The Ferris wheel called London Eye was the most interesting place, because I could see so much from the top. I could see the Tower of London, the London Bridge, Somerset, Big Ben, Buckingham Palace, tons of different neighborhoods and so much more. I mean London is the coolest all together, but the London Eye was the highlight of my visit.

What is the air temperature right now?      50 degrees Fahrenheit

How was the weather this week?     The weather was warm in Barcelona. It would be cloudy in the morning then sunny for a few, then maybe partly cloudy. It was warm though. In Barcelona it was usually about 60-70 degrees Fahrenheit.

What animals did I see this week?   I saw many squirrels! It might not sound that interesting but I haven’t seen any in Barcelona so it was neat to have them around again. I watched the Buckingham Palace Guards riding their horses during ‘changing of the guard’. That was cool. I also saw magpies (birds). Oh yeah, can you believe that I saw a fox sneaking through in the backyard of the apartment I was staying at! 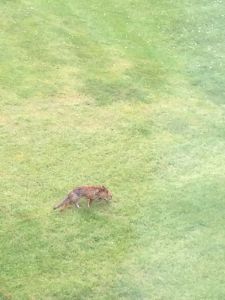 What was the coolest thing I saw in nature this week?    The clouds in London are always changing. I love watching the skies. Besides the squirrels, the fox and the giant Ferris wheel, the skies were really cool to watch.

Other Nature News: It rained in London, what a surprise. It was real rain too, like you needed an umbrella. The rain in Barcelona is wimpy compared to the London rain.

What languages are spoken here?   English! People in London say “Cheerio” and other funny words. I heard other languages at some of the big tourist sites. For example, there was a couple speaking Spanish in my Ferris wheel cabin. I said bon dia which means “good day” in Catalan.

What type of money is used here?     Not euros! I had to exchange my money to pounds. I had $200 American dollars and exchanged it for 114 pounds. London is so expensive. A burger (veggie) is seven pounds. So do the math; that’s about $12 bucks.

How much does a bottle of water cost?  At one of the big tourist areas, maybe Trafalgar Square, 500ml water bottle was 3.50 pounds! That is only about 16 ounces of water. That’s more than $5… crazy. But you can drink tap water there, so I could fill up my water bottle. At a regular store a 750ml water bottle was 1.50 pounds.

What was the best meal this week?  Chips and a veggie burger were awesome. The chips, or French fries, were so good with mayonnaise and ketchup. It was so nice to have an American-like meal. 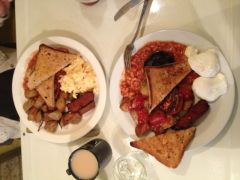 What music did I listen to this week?  There’s lots of music playing everywhere in London. All the restaurants, clothes stores and even some of the busy streets have music playing on the loudspeaker. I passed the festival and this elephant car was playing Bollywood dance music. Check out the video I sent.

What activity was the most fun this week?    The whole experience of London was amazing. As far as the most fun activity, maybe sitting on top of the double-decker bus. That was neat, because I could take lots of pictures while driving through the streets of London.

What did I read this week? I’m still reading The Shadow of the Wind for my Spanish Literature class. Great book!

What games or sports did I play this week?  I didn’t play any sports this week, but I saw billboards for Rugby, soccer, cricket and basketball in London.

Other news from this week: London was amazing. I hope you like the pictures and videos. Next weekend I’m going to Granada!