Have you heard of Paris? It’s the capital of France and a very beautiful place to visit. This is one of the many European capital cities I visited during my spring break trip. It was a lot of fun exploring the city and seeing all of the interesting buildings and museums. Hopefully you all will be able to visit Paris one day too!

2,200,000 people live in Paris, so it is not as big as New York City, which has 8,200,000 people. Even though it is not as big, it felt bigger! Since Paris is not close to the ocean, it sometimes felt like the big buildings would never end. New York City is close to the ocean, so you are able to go to the water and look far off into the distance. It is not possible to do this in Paris.

Paris is 800 miles away from Bodø! That’s the distance from New York City to Costa Rica. Since it is so far, I had to take a couple of flights to get there. I first flew from Bodø to Oslo, which is the capital of Norway. Then I flew to Copenhagen, the capital of Denmark. My friend lives there and it was so nice to see her. The next flight brought me to the wonderful city of Paris.

In Bodø, most students get around by bus. In Paris most students get around by the metro, or subway. It’s very similar to the transportation in New York City. The metro is very fast and not very expensive. Most of the time instead of taking the metro I usually walked around Paris. This made it easier to see all of the wonderful sites. The Eiffel Tower is probably the best-known place to visit in Paris. The tower is built out of iron and was made for a fair all the way back in 1889. It is the tallest building in Paris, and one of the tallest in Europe! It was a very beautiful place to visit.

In France they do not speak English, but instead they speak French. I do not know French, so sometimes it was difficult to communicate with people. I had to ask a question in English and hope that the other person knew what I was saying. Many tourists visit Paris, so most people in Paris speak English.

While I was in Paris I met one of my old friends. He is from Scotland, a country in the United Kingdom, which is west of France. Take a look on a map! My friend’s name is Gregor, and Gregor speaks English and French. Since he knows French, he was able to order food for me and ask questions to other French people. That made things much easier. Gregor and I went to the Palace of Versailles, where King Louis XIV lived. It was very beautiful, and we walked around the garden and toured the palace.

One of the difficult things about traveling is exchanging money. The U.S. dollar is not used in Europe. Most countries use the Euro, which is not the same thing. Norway and England also use different money, so it was difficult to remember what type of money I needed to use! You can’t buy anything in Europe with US dollars, so you have to exchange it for the money that is used in each separate country.

It was not very warm in Paris. Actually, it even snowed one day! Out of the three days I was there, one day was sunny, one day was snowy, and the other day was cloudy. This is not very common in March in Paris. Usually it is cloudy or sunny, but it rarely snows at this time in the year. Even though it did snow, I brought a warm jacket and hat so I was comfortable the whole time. I also had lots of coffee and hot chocolate, which also helped warm me up.

Are you interested in visiting Paris, the capital of France? It is a very beautiful place and I am so glad I visited. The Eiffel Tower was my favorite place I visited, but I did like visiting the Louvre as well. The Louvre is a very famous museum. Even though I enjoyed my trip, I am very happy to be back in Bodø! Until next time, ha det bra (goodbye)! 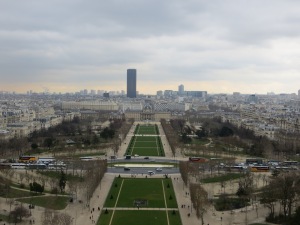 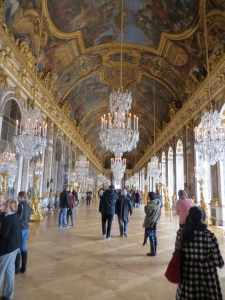 Hall of Mirrors at Versailles 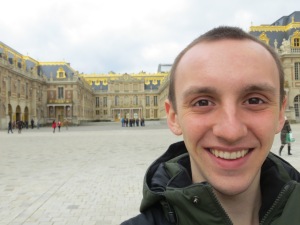