There is a cactus plant that grows all over Malta which has many uses.  It not only produces fruit but the juices from the fruit are used for many things.  The juices are used in candies and jams as well as stucco wall adhesive (glue) for homes.  This cactus plant is called the Prickly Pear Cactus. 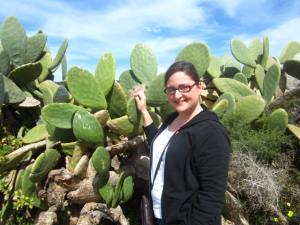 What do we see in nature?The plant I have decided to talk about is the opuntia plant. It is also known as the Prickly Pear Plant and is part of the Cactus family.  In Malta, it is a plant that can be seen all over the island.

This plant looks like a tangled web of flat cacti, with one piece growing over others in different directions. It has  a reddish-pink bulbous fruit growing at the tops of the cactus plant.  This fruit is the prickly pear. It makes the plant look almost like a Giant’s flat hand with bulky, big red fingers or nails.

How did I feel when I saw it? 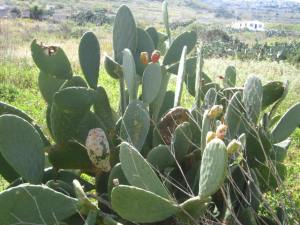 I was very attracted to this plant when I first saw it!  At first,  I thought it looked like an aloe vera plant, but I knew it wasn’t.  Aloe vera is another type of plant, but its stems are triangular.

On a walk through Marsaxlokk village, I learned from a local that this plant was the Prickly Pear cactus.  I became very interested in it because I remembered trying the fruit! I was curious as to where on the cactus the fruit grew.  It wasn’t until a hike through Mellieha that I saw that the fruit grew at the very top of the plant. Ifound that to be so strange but cool. Again, it really looked like a flat hand with red fingers. 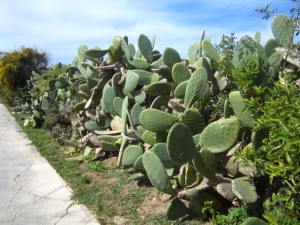 Where does it live?

The Prickly Pear plant grows in many parts of the world like Mexico, Tunisia, Spain and even in some parts of the U.S.  It is a popular 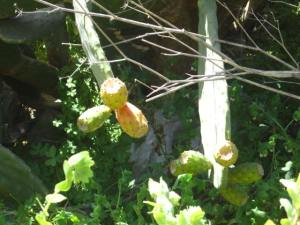 plant here in Malta because of the weather and ground conditions.  If you look at a map and look up Malta, you will see it is a tiny island in the middle of the Mediterranean Sea.  It is south of Sicily, north of Libya and east of Tunisia. The type of climate that is in this region is where the Prickly Pear cactus thrives. The island provides the perfect temperature and living conditions for the plant to survive. Considering what you know about the climate in places like Mexico, Spain or even here in Malta, what type of climate do you think the Prickly Pear cactus needs to survive? Do you think it thrives in cold temperatures or hot ones?  Another up close shot but here you can see some damage to the fruit

How does it use its environment to survive? 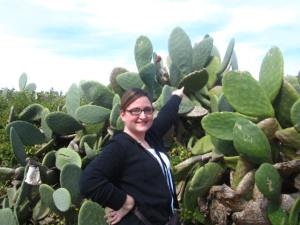 Maltese soil offers a stable physical structure because it is mixed with clay.  Also, to has a very  high calcium carbonate level and good ability for rainfall drainage. Overall, these elements create the perfect environment for the Prickly Pear plant to survive.  It gathers the nutrients and water it needs to grow during the rainy season to help it bloom in the spring to produce the fruit.  The fruit falls off, the plant dries up a bit and the process starts up again when the temperatures cool and rain begins to fall.

What can harm this creature? Are we worried about it?

References used for this article: 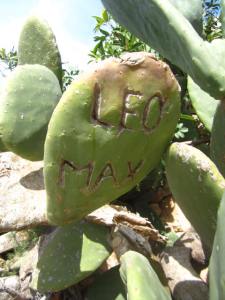 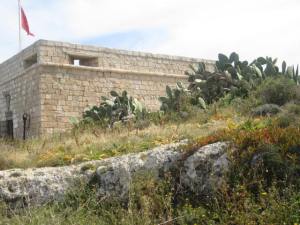