Parting of the Jindo Sea!

This week I headed down to the very bottom of Korea to join the local people in a special festival! Look at a map- do you remember where South Korea is? Now, do you know which direction is south? I traveled to the southern tip of South Korea to a small island called Jindo. Each spring, Jindo holds an event known as the Miracle Sea Parting Festival. I had heard of the sea parting miraculously in the Bible story about Moses, but I didn’t know that I could ever see it happen with my own eyes! 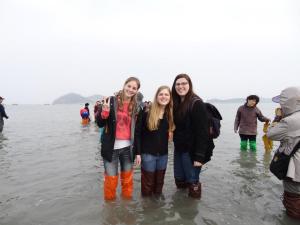 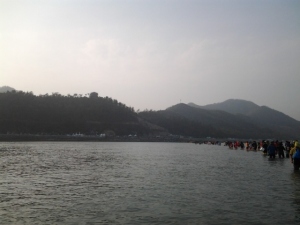 What tradition did I learn about?

I had a great time at the Miracle Sea Parting Festival! It took a train, a taxi, and two buses to get there, but it was worth the long trip. I loved getting to spend the afternoon joining the local people of Jindo in their celebration.

When I arrived, I could hear the music playing a happy tune and smell the food sizzling at the stands. There were booths representing many places around the world. I got ice cream from a hilarious Turkish man! Later, I ate fresh roasted chestnuts from another food booth. I also had traditional Korean cracker bread, which is hollow and crunchy, filled with delicious brown sugar!

Many people were singing, dancing, playing instruments and dressed in traditional Korean outfits. The music was very upbeat. It was easy to tell that this was a celebration! Drums seem to be the most popular instrument in the traditional Korean music groups. I have always wanted to learn to play the drums. Do you know how to play any instruments?

Once we reached the ocean, many people were gathered and waiting for the sea to part and uncover the sea road. When it is uncovered, the sea road connects Jindo Island to another small island which is almost two miles away! Usually, people have to take a boat to get to the small island. During the sea parting, all you need to do is walk!

There was still a little bit of water on the sea road when I was there. Before going into the ocean, I bought crazy rubber socks which went up past my knees! These kept me dry as I headed into the sea.  Almost everyone in the water had these special socks. Walking in the ocean was neat! The Korean people were thrilled to see foreigners being fully immersed in their tradition.

Why does the community have this tradition?

The Sea Parting Festival started because of an old Korean folktale! One day, tigers came to the island of Jindo. The tigers were very hungry and were looking for a meal. The people of Jindo were afraid of the hungry tigers since they were so dangerous. They hurried to escape the island. Oh no! Poor Grandma Bbong was left behind! She was terrified, so she prayed to the sea god to save her life. The sea god led her to the ocean, where the sea miraculously spilt. She was able to cross the sea and reach her loved ones before the tigers found her. Sadly, Grandma Bbong died from exhaustion in the arms of her loved ones.

A statue of Grandma Bbong and a ferocious tiger can be seen at the start of the sea road. The Sea Parting Festival is a great way to honor Grandma Bbong. The dances and music at the festival are an exciting way to celebrate the history and culture of Jindo.  These days, the festival is full of life! History and current life are both included in the festivities.

Do you like to eat seafood? In Korea, seafood is very popular. Why do you think that is? I’ll give you a hint- look at a map of Korea again. Did you notice that most of the country’s border touches water? Jindo is an island, which means that all of its borders are water! No wonder they eat so much seafood in Korea, they are surrounded by the sea!

At the sea parting festival I saw many people collecting food from the sea. Most people were gathering seaweed. Have you even eaten seaweed? I think it is delicious! Other people were collecting clams, while others were out in their boats fishing. These things happen year-round, but during the sea parting, it is an especially good time to head to the ocean. Many of the rocks that are usually under water are exposed. Also, the sea road allows people to walk into the ocean, where they can collect food they wouldn’t normally be able to reach. Having more than enough food is definitely worth celebrating! 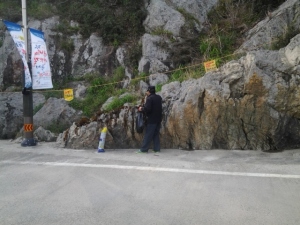 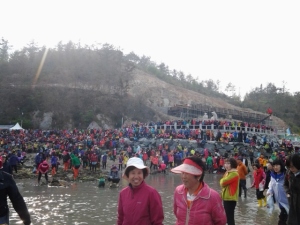 Okay everyone, I have a confession. The sea parting isn’t actually a miracle. The Jindo sea parting is a result of natural forces, but it’s still cool anyways, isn’t it? The sea road is uncovered when the ocean water reaches an unusually low level during one of its tides. Usually, the road is covered by water too deep to walk through. It is only a few days out of the year when the water gets low enough to see the sea road. Tides occur all over the planet, due to the Earth’s gravitational pull with the moon. So, this tradition is all about its environment! The festival is held each year, but the date is scheduled according to the tides. You wouldn’t want to have a miracle sea parting festival if the sea didn’t really part “miraculously”!

I was lucky to be in Korea during the Sea Parting Festival! Living here and learning about day to day life has been a great experience, but my favorite thing to do is to experience the culture through special events. It is so fun to see what and how the Korean people celebrate! Every culture has its own traditions. If you ever have the opportunity to see a different culture’s way of celebrating, please go! I promise you will learn something new and hopefully you will have a great time!