Abstract: Many Colombians consider themselves religious. Although there are a variety of religions in Colombia, the majority of Colombians I have met belong to the Catholic Church. Many common day-to-day traditions and phrases derive from their connection to religion!

Every town in Colombia has its own unique charm. One town might have a statue of the country’s founding father in the plaza. Another town might be known for its cafes where you can sit down for a cup of coffee and pan de queso. Other towns may be known for their beautiful rivers or their leather goods. Although all Colombian towns have their own special charm, every town is guaranteed to have one thing in common: a magnificent church.

Catholicism, and religion in general, plays an important role in the lives of many Colombians. Usually, churches are open all days of the week, and have mass at least once a day. On Sundays, mass can be held up to four times a day. In many of the towns in Antioquia, churches are the center of social life. Not only are masses held inside the church, many people stand outside and sell food, rosaries and sweets. My landlady says that the best empanadas you can find are the ones that are sold outside of church. After eating the bite-sized corn patties sold on Sunday mornings, I think I have to agree with her!

What tradition did I learn about?
While I have lived in Medellin, I have witnessed a number of religious traditions. The most common tradition I have seen is what is referred to as santiguar. To santiguar is to make the sign of the cross. The cross is one of the most important symbols in Catholicism and represents the belief that Jesus’ suffering enabled salvation for humankind. If you are Catholic or have any Catholic relatives, you are probably familiar with this gesture. It begins by touching the forehead with the right hand, then touching the chest, then the left shoulder, and finishing with the right shoulder. Can you see how the gesture makes the shape of a cross?

When I first witnessed this gesture, I was sitting on the bus to the university. As we passed by a church, I noticed that the girl sitting beside me made the sign of the cross. Later that same day, I noticed a student also make the sign of the cross as we walked past the church near the university. Recently, as I rode in a taxi towards my apartment, I noticed the taxi driver make the same gesture as we passed another church in my neighborhood! Though I was familiar with the gesture, I was confused as to what it meant and why it was made as one passed a church. Curious to find out, I consulted a friend who once studied in the seminary to become a priest.

“We make the sign of the cross to show respect to God,” he began. “Every church is a house, or a temple of God. As we pass by the church, we make the sign in order to thank God for his love and mercy, and to ask him for his protection.”

Although I had gone to a Catholic high school and have been inside many churches in New York, the most beautiful churches I have seen are in Colombia. The churches boast colorful painted windows, and a variety of hand-made representations of important religious figures. Many churches here date back to the colonial period, when the Spanish first arrived to Colombia. Indeed, the oldest church in Colombia dates back to the 1500’s! The importance of the church as a community center and a temple of God continues to this very day.

Why does the community have this tradition?
Many Colombians have a strong faith in God. Even Colombians who do not belong to the Catholic church often believe in some form of God. When I first arrived to Medellin, I became friends with a group of students who meditate. Every Sunday, instead of going to mass at the church, they met up to meditate. One day, I asked one of the students if she had Catholic family members. She said her brother is Catholic but she is not., though she believes in God.

For my friend and for many Colombians, believing in God provides a common language to interact with other community members. Although there are differences in the ways in which people worship or communicate with God, many Colombians nevertheless believe in God.

Catholicism, and a strong belief in God, is so ingrained in Colombians that it has become part of everyday speech! It is not uncommon to say thank you by saying “que Dios le pague” or to add “gracias a dios”, or thanks to god, after saying that one is doing well.

The saying “que Dios le pague” translates to “God pays you.” I first heard this phrase after giving a private English class in one of my student’s home. At first, I didn’t quite understand the sentiment of the phrase. I soon realized that it was a way for my student to express gratitude! By saying “que dios le pague”, one wishes God’s blessing for another person. It is a way to show that one is grateful for another person’s selflessness. What are the ways that you show gratitude?

“Take this with you wherever you go,” my grandmother said, with tears in her eyes. “And God will protect you.” As I opened the pamphlet to read what was inside, I realized it was a prayer to God that asked for his protection and blessing. My grandmother’s gift was a way for her to show her love and concern for me! I packed the pamphlet into my suitcase and to this day, carry it with me everywhere I go.

Even on the street you can find images of Catholic saints — this was taken at a bus stop! 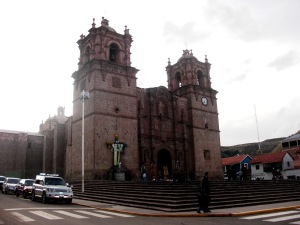 A church in a pueblo in Peru — all over South America, Catholicism is very important!

Beautiful, hand-painted images of saints are essential to churches in Colombia

An image of Jesus on a stained glass window

Every pueblo, or town, has a church in its main plaza!

Given their historical importance, many churches have been restored

Outside of the church, the plaza is alive with vendors and cafes!

Churchgoers hold Mary in order to receive her blessing

The oldest church in Colombia!