Did you know that the United States has a national flower? Do you know what it is? If you guessed the rose, you are correct! Some of you may now be wondering if Chile has its own national flower. Well, of course! Chile’s national flower is called Copihue (co-pee-weh). I was lucky enough to see it for the first time during my trip to Pucón, Chile.

My host mom, Alicia, told me about the Copihue when I first got to Chile. Every single part of Chile is filled with gardens and beautiful flowers, which had me thinking that Copihues would be around everywhere. I was wrong. It took me a whole month and a half to find it! Interestingly, I was flying across on a canopy in Pucón, Chile when I spotted something red hanging from the bushes. As soon as I got to the next station on the canopy I asked our guide what they were. They were Copihues!

I reached to get one when the guide quickly told me “no!” I then learned that breaking a flower off its bush in Chile is not allowed. It was very unfortunate, but I knew I had to at least get a picture with a Copihue to show you all. After my canopy adventure, I asked the guide if he could take a picture of me with the Copihue. After promising him that I would be very careful around the flowers, he took me to the back of the forest where the Copihues were. I got a picture with it to show all of you!

The Copihue first reminded me a lot of a tulip because of its shape. Their color is somewhere in between fuchsia and red. It is also a vine plant so it leaves grow and twirl around almost endlessly. I was surprised by how hard and waxy its petals were as well. Each flower has six of these flowers so the layers of petals make the flower look extra beautiful. The Copihue also has a few yellow seeds in the middle that are edible!

How did I feel when I saw it?

I was overly excited because I had been waiting to see a Copihue for so long. I was also very surprised by its texture because I was not expecting for the petals to be so hard and waxy. The most exciting part about it was that I was able to get a picture with one.

Where does it live?

I previously mentioned how it is difficult to find these flowers. I had to travel 12 hours to the South of Chile to just get a picture with one. The Copihue is found mainly in the forests of Southern Chile, which explains why it took so long for me find one.

How does it use its environment to survive?

These flowers best grow in a moist environment. They will not survive long if put out in the sun with little water and no shade. It is best to mist the flowers with water rather than to pour loads of water on them.

What can harm this creature or plant? Are we worried about it?

While I cannot say that the Copihue is in danger of being extinct, I do know Chile is very protective of it. This is why I wasn’t allowed to take one from the forest in Pucón. 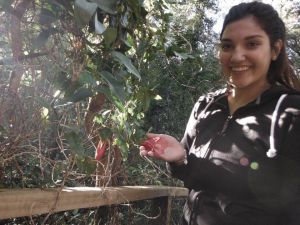