Taking the train down the coast and through the heart of Spain ending up at the Moor-ish influenced Granada has been maybe the coolest trip during my journey so far. What a great adventure!

The history in Spain is long and dynamic, and includes the Moors people from the North of Africa. 700 B.C. through the late 1400s the Moors had a prominent role in the peace, war and diversity of Spain. The Moors had such a beautiful cultural influence on Spain that is directly represented by the Alhambra. From fortress to palace, the history that is stored in the walls of the Alhambra is beautiful. The detail put into the woodwork, the stone work and the design is spectacular – not to mention the surrounding areas and views from the Alhambra.

I had an amazing weekend walking the street of Granada (the city that surrounds the Alhambra) as well as getting a taste of the culture in the Flamenco show and the finally on Sunday spending the entire day exploring the Alhambra. Of all the different places that I’ve been to and travelled on this trip, the Alhambra is place that everyone should see in their lifetime. It is truly spectacular.

Last Friday I met my friend Kristen at 7:00 am to catch the train from Barcelona to Granada in southern Spain. This was my first time travelling in Spain other than my 30-minute train ride to Sitges. The train seemed to follow the coast south for about five hours. The train travelled in and out of many small, medium and large towns, before we started heading towards the middle of Spain. That is when the trip became amazing. The countryside was rolling green hills and small towns that looked hundreds of years old. I couldn’t see them that well, but it looked like the buildings were still all whitewashed and close together. For example, when you get out to the country in America, the houses or ranches seem to be spread out. In the Spanish countryside there were some isolated houses, but most areas were clusters of whitewashed houses.

Almost everywhere olive trees were growing, lots and lots of olive trees. Most towns usually had a train station (although most of them were no longer in use), and close to the train station there was an olive oil mill, where they had processed the olives. Most of those were closed down too. Maybe all the olives are trucked off to bigger processing plants. It became apparent on this train ride that Spain grows olives and lots of them.

Once we got to Granada, it was raining so we took a cab to our hotel. Granada is built on the side of a mountain. Well, it seemed like a big hill. As we drove to the hotel we could see so much new stuff. Granada was bigger than I imagined; it was a small city. We passed through many different types of neighborhoods and made our way to the top of the hill to our hotel. All the streets were one-way except the main boulevard. 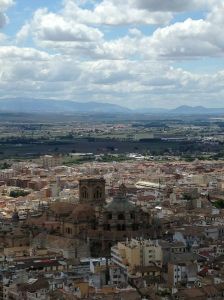 We spent Friday night and all day Saturday walking around Granada experiencing the city. There are many very old churches, lots of small restaurants and cafés as well as plenty of clothing stores and tourist shops. The streets are even narrower than in Barcelona. We ran into the parade that I filmed in the afternoon. On Saturday night we went to a Flamenco show. It was different from the Flamenco show that we saw in Barcelona, because there were more dancers but it was the same beautiful music. It was a lot of fun. 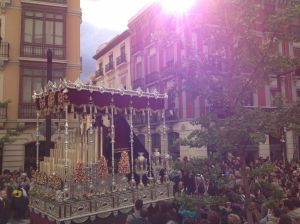 On Sunday we went to visit the Alhambra. We walked in at 9:30 in the morning and walked out at 4:30, after walking all day through the amazing gardens and buildings of the Alhambra. It was truly spectacular! I hope the pictures and videos do it justice. You might need to investigate the Alhambra on-line and dig into its rich history.

On Sunday night we got back on the train and headed back for Barcelona. The train left at 8:30 that night and pulled into Sants Estacio at 7:15 in the morning. The trip was amazing. I would like to say it was the best so far, but they have all been different: Barcelona, Sitges, Rome, London and Granada, wow.

Location (Latitude, Longitude):  I’m back in Barcelona today (Monday), but spent all weekend in Granada, Spain. Granada is located in central-southern Spain, through the plains of Spain to the hills and mountains of the south of Spain.

How far did I travel this week? I started my trip to Granada travelling 620 miles by train. Once in Granada I walked over 20 miles this weekend through the streets and hills of Granada, not to mention the vast area of the Alhambra on Sunday. As I sit in my apartment in Barcelona and write this, my feet are tired.

How far have I traveled on your journey so far? I have travelled from my home to Barcelona, down to Sitges, east to Rome, north to London, and back down south to Granada, I have travelled exactly a lot. I should Google that; I bet that’s a lot of miles. Not to mention all the walking. It has been a lot of travelling.

How did I get around this week?    I rode a train, used the Metro, rode a bus in Barcelona and Granada, rode in a taxi and walked a lot. Each week I think that I’ve walked a lot and that I’ve never walked so much and then the next week I walk more – amazing. 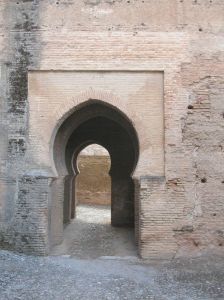 How was the weather this week?     This week was very spring-like. It started off cloudy and partly cloudy Monday and Tuesday. Wednesday started off partly cloudy, but ended up sunny, and Thursday was the same way. It rained most of Friday and Saturday, and then Sunday was partly cloudy with some sunshine. One week has many different weathers.

What animals did I see this week?   I saw magpies, pigeons and small sparrow-like birds in Granada. I saw a longhaired squirrel in Granada. It was funny looking, and had not shaggy but the longest hair that I’ve seen on a squirrel. Of course I also saw lots and lots of dogs in Barcelona.

What was the coolest thing I saw in nature this week?    The gardens in the Alhambra were pretty cool, but I would have to say that the skies in Granada were the coolest. There is the Sierra Nevada mountain range (same name as the mountain range in California), that border the Granada valley on one side of the plains. The sky is big. I mean you can see for miles. It was partly cloudy with rain in Granada, so I could see it raining miles away while it was sunny where I was standing, but cloudy again in the another direction. 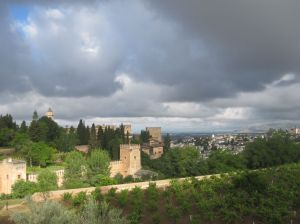 Other Nature News:  The Sierra Nevada Mountains and the area of Granada were pretty amazing. From the highest point in the Alhambra I could see snow-covered mountains and then do a 180-degree turn and see a hot valley. I’m going to research of that area to learn what the natural dynamics are all about. 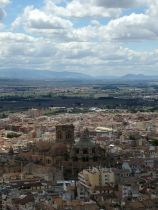 What languages are spoken here?      Castilian! People in Granada spoke Castilian, which is proper Spanish, not the fancy flavorful Catalan. It was a lot easier to try to understand people when they spoke in Granada. Once I was in the Alhambra I recognized many other languages like German, French and Japanese.

What type of money is used here?   Granada trades in euros. It’s a lot less expensive in Granada than Barcelona or anywhere else that I traveled so far. That doesn’t mean it was cheap though. The bus was 1.20 euros, and the one time that I ate out it cost eight euros for a pretty small meal.

How much does a bottle of water cost?   Again, Granada was less expensive than any of the other places that I’ve travelled. A liter of water was 1.30 euros at a store right next to the train station.

What was the best meal this week?  Fresh fruit is my favorite meal in Europe. The one thing I didn’t find in Granada was great food. It was okay. I had tapas one night, which was egg and tuna on a small bun and another with cheese and a sweet pepper spread. There has to be an art in picking the right restaurant in any city in Europe. I haven’t figured it out yet. Another night I had grilled veggies with bread, hmmm.

What music did I listen to this week?   I listened to a lot of Flamenco music this weekend. On Saturday night we went to watch a Flamenco show, and that same day I heard street musicians playing it in the streets. Flamenco has grown to be one of my favorite types of music. I never really understood it until I saw it live. I love it.

What activity was the most fun this week?  The train ride from Barcelona to Granada was a lot of fun. I sat by the window and watched as we passed through many different regions from city to town to field to farm. I also sat in the rear of the last car, and watched and took pictures from the rear window.

What did I read this week? I finished Shadow of the Wind on the train ride back from Granada. It was a great read. I highly recommend it to anyone.

What games or sports did I play this week? I didn’t play any sports this weekend, but Barca won the Champions cup! That’s a big deal here. I wasn’t here for the celebration on Sunday night but I heard that it was a lot of fun!

Other news from this week: My trip to Granada was amazing. The city is rich in history but it also has a lot to say. There was a lot of graffiti in Granada, the most I’ve seen in ant city that I’ve visited so far in Europe, and a lot had to do with the control of the banks and the unemployment in Spain and especially Granada. I got a real sense of unease as I read a lot of it. I do see the popular spot in town where a lot of the tourists go, and I do try to walk the everyday streets, but this weekend we took a wrong turn and really saw the underside of Granada. I mean it was dangerous. There was just a lot more graffiti and people knew right away that you weren’t from there. I like that though. I feel privileged to be able to get a real feel for the city and the people. I have taken pictures of the street art and graffiti in all of the cities that I’ve travelled in Europe. It’s been interesting. 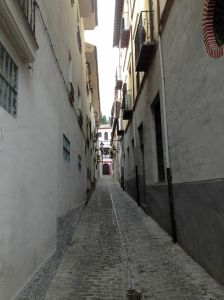