Title: To Prague and Back

This weekend, my husband and I visited Prague in the Czech Republic. We had hoped to visit some other places in Poland, but because my friend was visiting from the U.S., it didn’t work out. I’m running out of time in Poland, and there are so many places I want to visit!

How far did I travel this week?

I traveled about 850 miles.

How far have I traveled on your journey so far?

Altogether, I have traveled about 9,000 miles since I left for Poland.

How did I get around this week?

What was the most interesting place I visited this week?

Prague is my favorite European city. It is incredibly beautiful, with stately, pastel-colored buildings, surrounded by green hills. It is home to the world’s largest castle complex. Prague was once the capital of the Holy Roman Empire. It is also the capital of the Czech Republic. There are so many interesting places in the city. The castle is very cool. So is the Jewish Quarter and the Old Town.

Another interesting place is Karlstejn Castle in Karlstejn, which is about twenty-five minutes away by train from Prague. The castle was built to store the Czech crown jewels. We climbed to the top of the largest tower in the castle. The castle is on a hill, so we could see for miles!

My best friend Monica came from the United States to visit me! We originally planned to meet in Gdansk, a famous Polish city on the Baltic Sea. I wanted to share this city with you! But it was too expensive for Monica to fly there from Edinburgh, Scotland, where she was visiting another friend. Actually, it was expensive for her to fly anywhere in Poland. So we decided to meet in Prague, Czech Republic instead.

We had so much fun in Prague! My husband and I were in Prague for New Year’s, but the city is much nicer when it is green and warm. We walked around a lot, ate delicious Czech food, and visited some places we missed last time. We took a train to Karlstejn to visit the castle on Saturday. It only cost us five dollars each way on the train!

Traveling back to Poland was pretty terrible, though. I bought tickets for the night train so we could have more time with Monica. When I bought them online, there were no sleeper cars available. Night trains in Europe have cars with anywhere from six to two bunks. It’s a great way to travel.

I bought normal seats, thinking I could upgrade at the train station. When I was in Europe last time, doing this was very easy. But the man at the ticket office said it was impossible to upgrade! My husband and I had to spend the night on hard, carpet-covered bench seats. It was very uncomfortable. A man in the compartment next to ours was snoring so loud, you could hear him through the walls! We know now to buy our train tickets far in advance.

How was the weather this week?

It has been very warm and sunny, but the nights are nice and cool. It rained a little in Prague, but mostly in the mornings and evenings.

What animals did I see this week?

I saw ducks and swans with their babies. Baby ducks may be the world’s cutest animals.

What was the coolest thing I saw in nature this week?

We rode to Prague through fields of gold! In the Czech Republic, farmers grow fields of yellow flowers. I’m not sure what these flowers are for, but it was incredible to see them!

Czech is spoken in the Czech Republic. It’s a lot like Polish. I can understand some Czech, and many Czech people can understand my Polish. Slovakian and Ukrainian are also similar to Polish.

In the Czech Republic, they use the koruna, or crown. The money is really pretty, especially the coins!

We found a big bottle of water that cost 3 koruna. This is about sixty cents. What a deal!

I finally got to eat duck! Duck is pretty popular in central and eastern Europe, but in Poland, it’s a bit expensive. In Karlstejn, I ate roast duck with bread and potato dumplings, served with a side of the best red cabbage I have ever eaten. My mom’s mom, who is Danish, makes red cabbage every Christmas, so I am a bit of an expert. The cabbage is cooked with sugar, vinegar and spices.

I also finally got to try a trdelnik, which is a hollow tube-shaped cake coated with cinnamon and sugar. It tasted like a warm cinnamon roll. I got mine with Nutella spread on the inside. It was the best dessert I have ever had!

My husband, friend and I rented a paddle boat and paddled around the Vltava River in Prague. It was sunny, warm and relaxing. We were surrounded by beautiful buildings, and we could see the castle in the distance.

I tried to read a Czech travel magazine on the train. One of the articles was about taking the famous Orient Express luxury train from Prague to Istanbul. I couldn’t understand much, but it sounds incredible. Taking this train is my new travel dream!

Other news from this week:

This weekend, I am going with my landlord and landlady to their house in the country. They own an old house in the woods near a lake. The house is over one hundred years old, and was moved from a village to its present location. I’m really excited to be able to spend some time with them before I leave. My landlady is kind of like my Polish mother. She looks after my husband and I, brings us treats, and teaches me Polish. She’s asked me to write her after I leave. Maybe I will even see her in America! She has a sister who lives in North Carolina. 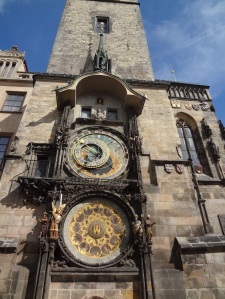 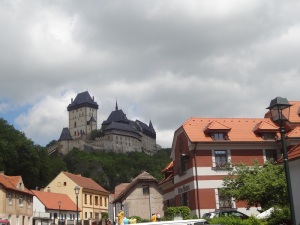 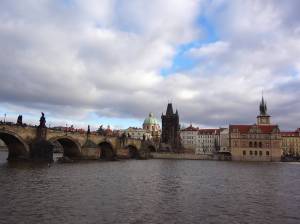