London is famous for the River Thames that runs through the city. Hundreds of years ago, the river was a main route of transportation for sailors to bring goods into the city. Over the years the function of the river has transformed into something scenic and historical. Today the River Thames is occupied by boats that show thousands of tourists how beautiful London is.

How are people connected to the environment?

Hundreds of years ago, the River Thames was a main route of transportation for sailors bringing goods into the city. Families would arrive on boats to the city from foreign cities. Before there were bridges in London, people had to cross the river by boat. The Thames River is a key part of London’s history. Today the river is not the main mode for goods being shipped out the city. People of the city do not use boats every time they need to get across the river.

Shortly after arriving in London, I took a tour on the Thames. It was incredible seeing London from that point of view. I saw London from a new perspective. I sat on the top deck of the boat. I felt the warm day breeze blowing across the river. The tour guide told me about the river’s history. He showed us where all of the old boat docks still exist today. It was amazing!

A view of South London

Last week the weather finally warmed up enough to enjoy being outside. My roommates and I decided to walk along the river. It is beautiful to look across the river on to the other side of the city. The buildings on each side of the river are so different. The south side of the river has the London Eye, an attraction that thousands of people visit each day. The north side of the river has Westminster Abbey, Big Ben, and the Houses of Parliament.  The river itself can be considered a landmark that sits between major pieces of history in the city.

What makes this environment special or different?

The river is special because although new bridges are built above it, it never lost its historical presence. Actually, the new structures compliment and highlight the river instead of covering it. The bridges allow people to see the river from a different angle.

I didn’t know much about the Thames River until I arrived in London. Now it is one of my favorite things about the city. I have crossed the river so many times, and still I am always struck by its beauty.

Even in the busy city center there are multiple reminders of the river. The manhole covers and city drains have the words “Thames River” written on all of them. You are reminded that water from the Thames is running underground throughout the city.  In flats and homes across the city, the water that runs out of faucets can be traced back to the Thames River. The river is embedded in London.

Here are a few more pictures that I took of the River Thames: 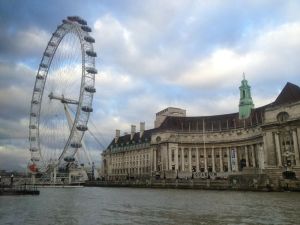